Ripe with romance, adventure and style, each luxury rail tour with the Deccan Odyssey is a one in a lifetime experience. The juxtaposition of the traditional with the contemporary is beautifully presented through vintage cabins, gastronomic cuisines and lively off-board entertainment in each of the deluxe train journeys with Deccan Odyssey. Each journey on the Deccan Odyssey is an exploration of India’s diversity, exotic locales and the discovery of timeless traditions; taking one on a flight of fancy as you experience the vibrancy, colours, sounds and visual sensations as the train moves through varying regions and rural countryside. 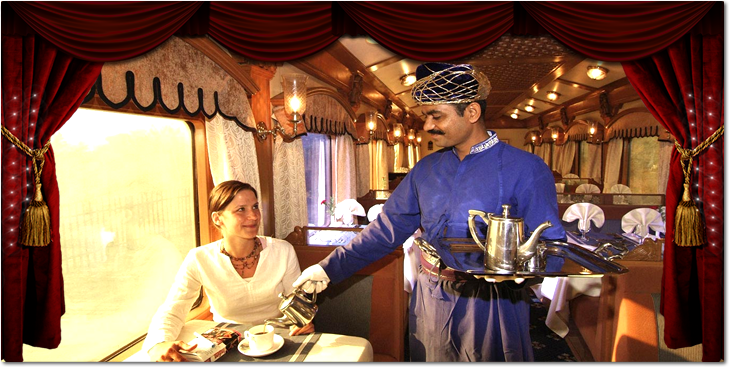 Where else you would find a UNESCO heritage site, a superlative vineyards, tigers & lions lazing in the sun baked stretches of wild brush, a palace residence, warm dazzling beaches and cool tranquil backwaters…. only in amazing India.!..

Since the advent of the railways in India, train journeys have been the subject of much fascination and mystery. Indian Royalty and the British aristocracy would often set out on a shikaar or on celebrations, out in the wilderness or deserts or mountains, travelling in the luxury of their private palaces on wheels. Today, the Deccan Odyssey continues this legacy of princely sojourns by introducing fascinating journeys covering the length and breadth of the exotic and enchanting landscape of India!

Ripe with romance, adventure and style, each luxury rail tour with the Deccan Odyssey is a one in a lifetime experience. The juxtaposition of the traditional with the contemporary is beautifully presented through vintage cabins, gastronomic cuisines and lively off-board entertainment in each of the deluxe train journeys with Deccan Odyssey.

Each journey on the Deccan Odyssey is an exploration of India’s diversity, exotic locales and the discovery of timeless traditions; taking one on a flight of fancy as you experience the vibrancy, colors, sounds and visual sensations as the train moves through varying regions and rural countryside. Mysteries, intrigues unfold as the train snakes her way through Royal cities showcasing the opulence and extravagance of the palaces, the traditions and culinary wonders of cities and villages well protected from the sands of time.

The Royal Indian train is benchmarked against the best luxury trains in the world-like the Blue Train of South Africa, The Orient Express of Europe and the Eastern and Oriental of South East Asia. The services offered onboard are at par with the best in the world.

In the journey through the culture, heritage, history, wildlife and sanguine beaches of the vibrant state of Maharashtra, some important information for you: 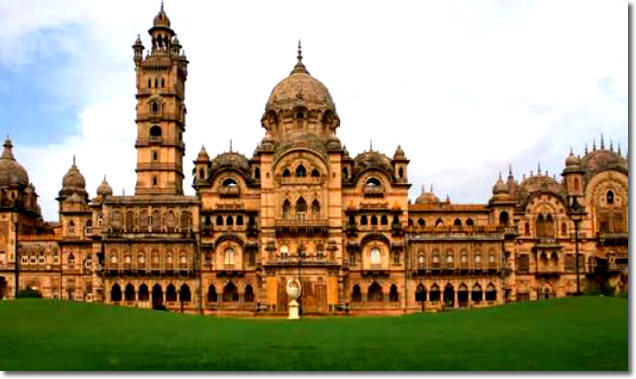 The 8 day Hidden treasures of Gujarat tour is meant to explore the spectacular vistas of this vibrant land in one of India's most luxurious trains, the Deccan Odyssey. On the royal journey, we wish to take you across the spell binding destinations of Gujarat that include the medieval capital of Vadodra, the holy city of Nashik, the wild sojourn of the Little Rann and pilgrim spots of Palitana. 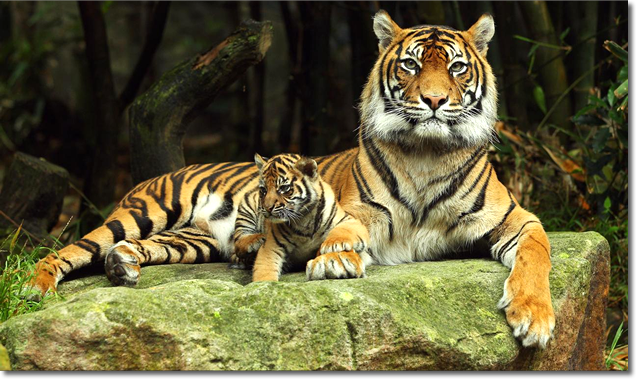 While the Ranthambore National Park will thrill you, the Taj Mahal will soothe your senses. On one hand the streets of Udaipur and Jaipur will fill your sight with hues, and then the rusty rugged landscape of Ellora Caves would pick your collar-backs and slowly land you on the land of history. That is just a glimpse of all that Indian Odyssey holds for you. Deccan Odyssey with its luxurious amenities and gracious services is reminiscent of the lifestyle lived by the maharajas in the erstwhile era.

Day 1 Saturday Board the Deccan Odyssey at Delhi – on to Sawai Madhopur
Day 2 Sunday Sawai Madhopur – Ranthambore National Park
Day 3 Monday Agra
Day 4 TuesdayArriving at Agra, you will realize that the Mughals were not just the greatest dynasty to rule India but also its greatest builders.After a leisurely breakfast on board, you will visit the Taj Mahal, which was Emperor Shah Jahan’s gift of love to his belovedwife, Mumtaz Mahal, and is truly the world’s most wondrous monument. The making of the Taj Mahal is as much a fable as theedifice itself. It took 20000 men 22 years to build this unrivaled mausoleum and its exquisite white marble was brought from 200 miles away by caravans of elephants and camels. Lunch at a City Hotel. After lunch, your tour of Agra continues as you visit Itmad-ud-Daulah, a marble mausoleum built by Nur Jahan, the wife of Emperor Jahangir, in memory of her father, Ghiyas Beg. Sometimes called the ‘Baby Taj’, it is beautifully conceived in white marble, mosaic and lattice. Thereafter proceed to Agra Fort, another outstanding example of Mughal architecture, and the seat of Mughal reign and administration for three generations. The present structure owes its origins to Emperor Akbar who had its first buildings of red sandstone erected on the eastern bank of the river Yamuna. His grandson Shah Jahan, the most artistic and prolific builder of the dynasty, later added the impressive marbled private quarters and the mosque while Aurangzeb added the outer ramparts. A visit to the Diwan-e-Am, ‘Hall of Public Audience’ and the Royal Pavilions is not to be missed. Later, you have the opportunity to visit the local markets to admire the exquisite Pietra Dura (marble inlay) artefacts and Mughal ornaments OR as an optional activity you may avail of spa facilities at a hotel before completing your tour of this historical city. Late evening, you return to the Deccan Odyssey for dinner and your onward journey to Jaipur, The Pink City. Breakfast on board; Lunch at a City Hotel; Dinner on board Overnight on Deccan Odyssey
Day 5 Wednesday Jodhpur
Day 6 Thursday Udaipur
Day 7 Friday Vadodara
Day 8 Saturday Disembark in Mumbai 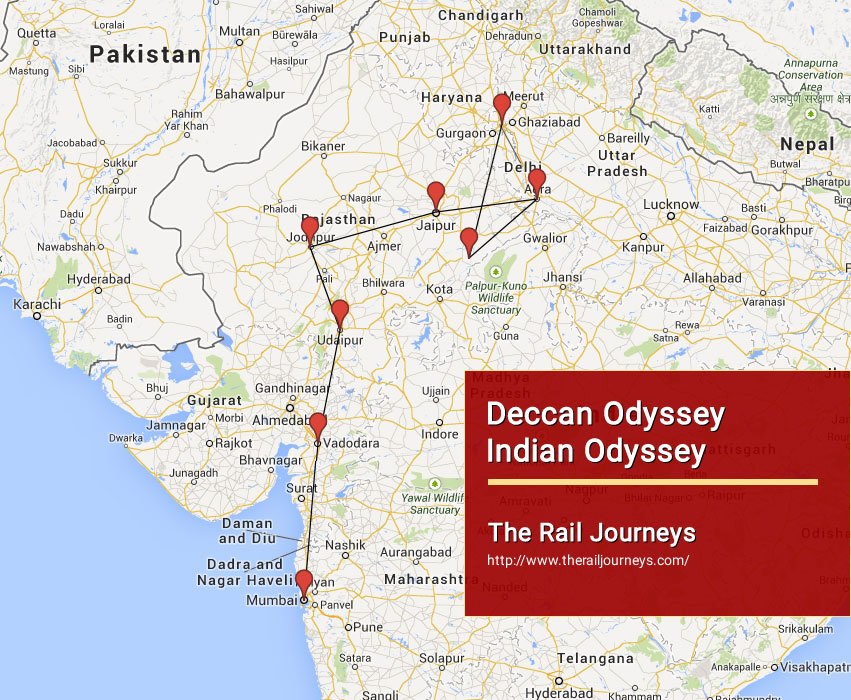 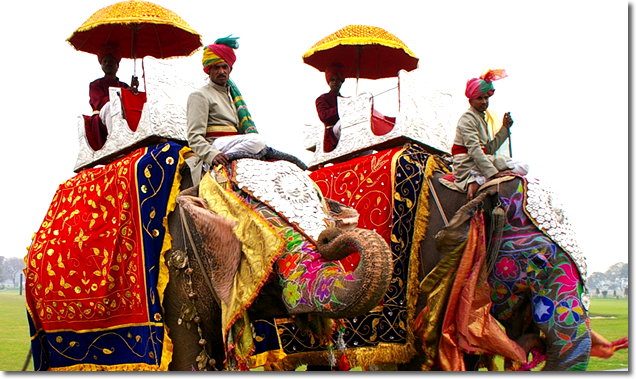 Deccan Odyssey, one of the leading luxury trains of India, offers a well-planned itinerary Indian Soujourn, offering a memorable journey for a span of 8 days. The journey offers you a chance to explore some of the best destinations of northern and western India including Vadodara, Udaipur, Agra, Mumbai, Jodhpur, Jaipur, Delhi and Sawai Madhopur (Ranthambore). Some of the highlights of the tour include a rendezvous with the big cats, a visit to the celebrated Taj Mahal, exploring historical architectural gems, a boat ride in the placid waters of Lake Pichola etc. Enjoy a grand welcome, indulge in world-class comforts aboard the Deccan Odyssey, relish sumptuous food, admire the impeccable royal interiors of the train and more. 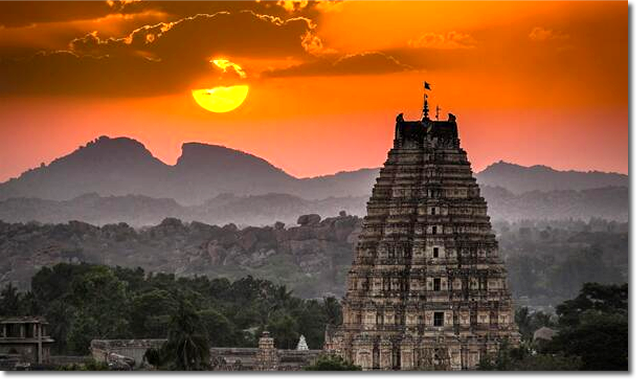 Deccan Odyssey is all set to take you through the real jewels of India. With Jewels of Deccan, get ready to explore the true beauty of India, that lies in its popular tourist destinations. Visit the historic monuments at Bijapur, seek blessings at holy shrines of Aihole and Pattadakal, enjoy sightseeing at Badami, have a look at the architectural marvels of Hampi, shop for bangles and ittars in Hyderabad and visit UNESCO World Heritage Sites- Ajanta and Ellora Caves. Get an insight of India's glorious history and rich culture with this royal journey. 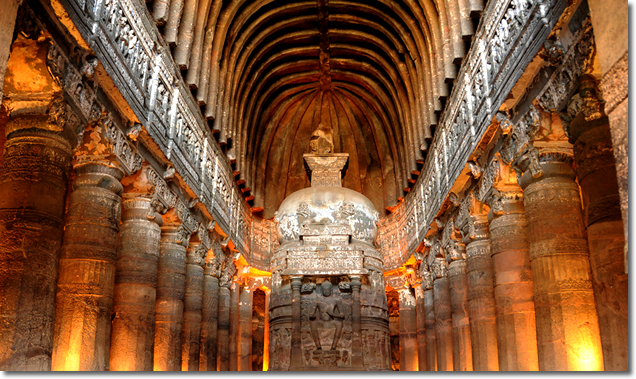 One of the leading luxury trains, Deccan Odyssey is all set to take you on an 8-day royal journey through the most beautiful destinations of India. The itinerary includes visit to the Wine capital of India- Nashik, colorful Kolhapur, India's party capital- Goa, Aurangabad and Jalgaon known for housing UNESCO World Heritage Sites Ajanta & Ellora Caves and the holy city of Ratnagiri. Get ready to travel through the most colorful side of India in a royal passage. Welcome to the Deccan Odyssey. 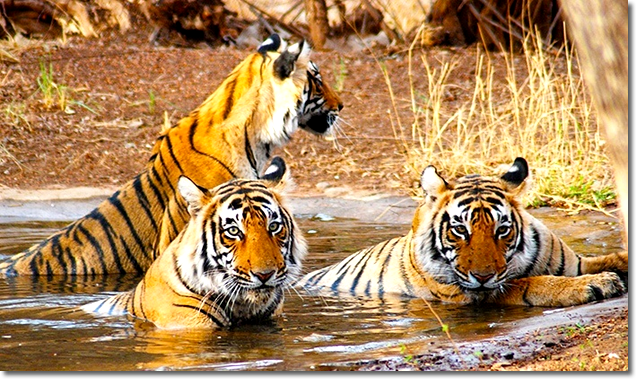 One of the finest luxury trains of India, Deccan Odyssey, offers a well-planned itinerary of 8 days that takes you to the neighborhoods of Maharashtra, the charming Western Ghats, the majestic Deccan region and the varied stretch of the central region of India. Some of the highlights of the tour include a visit to the world heritage sites of Ajanta and Ellora caves, a visit to the wine capital of India-Nashik, a rendezvous with the wildlife at Pench and Tadoba and more. During the tour, enjoy world-class comforts, a royal treatment and sumptuous food while you are on-board the Deccan Odyssey. 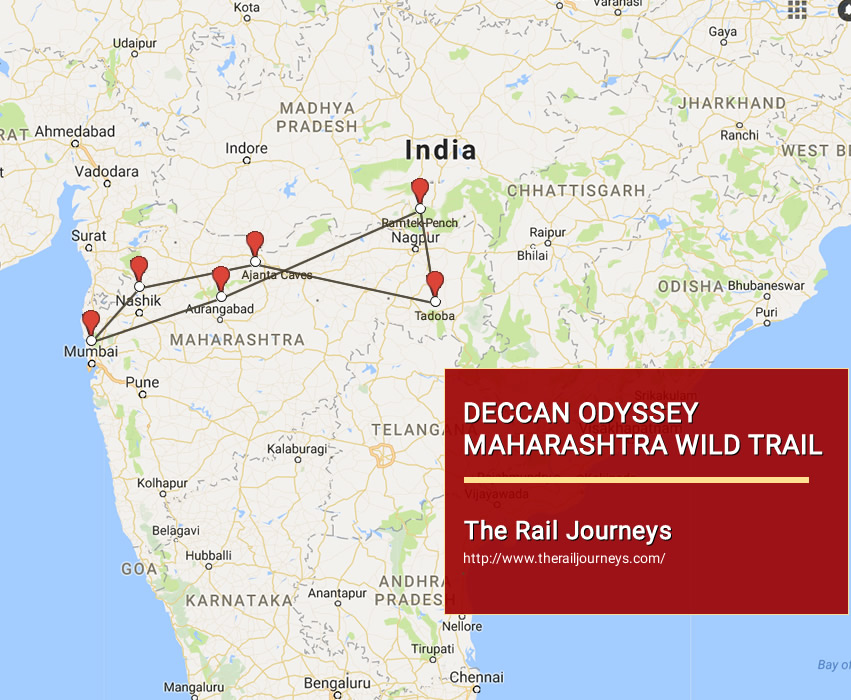 Recognized by Ministry of Tourism, Govt. of India

The Rail Journeys, a luxury initiative of EbixCASH, which is a leading corporation headquartered in India with a global presence, offering management solutions in the sector of Hospitality, Tourism, Leisure, Events, Entertainment & Luxury Rail Journeys. We are one of those key players of tourism industry who aim to develop, promote and expand tourism, nationally & internationally, with an offering of an unprecedented services and domains in the related sphere.